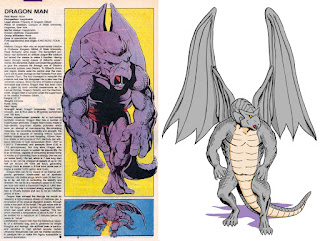 Here's my take on Dragon Man. I went back to his original appearance where he's drawn differently in every panel, and sometimes his wings look like an afterthought, seemingly tucked into his pants. Speaking of which, I ditched the Fin Fang Foom shorts, because a) dragon and b) android. Modesty be damned!

Links of Some Interest